Watch out for stressful times & don't fool yourself!

I had quit smoking for about 5 months flat-out, cold turkey, no patches, no gum, no nothing! Then I had a big move ahead of me (antipodean no-less) which provided a lot of stress. This, coupled with drinking at farewell parties, led me to caving in a couple of times. I started smoking again "socially" at parties etc. Just when the cravings were at their peak. I'd wake up stinking of smoke and ash. I was in such a funk about it that I tumbled into a regret spiral and started smoking "full time" again.

It wasn't until I was set up on the other side of the world again, back with old friends and family, that I realised what a fool I'd been. In fact, in a twisted sort of logic, I'd used the old "Caving in and having one cigarette is no reason to completely fold on quitting!" as a way of saying "Well it can't hurt to have just one".

I have since quit again and have even been through an even more stressful life-changing event, which I was more mentally well armed to deal with after my first experience.

The morals of the story are these:
There will be stressful times at which you will want to excuse having a cigarette. These are the MOST PIVOTAL points in your path to quitting. The more of these you get through without having a smoke, the stronger you will become.

If you do fold, don't get depressed about it - that will only lead down the wrong path. This can be more easily said than done, I know, but it's time to grit your teeth! Even more importantly, learn from the mistake. This will help you get out of a bad way, and help you prepare to jump the next time the same hurdle comes around. 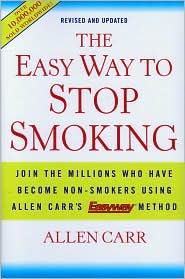 Editor's Reply: That's an inspiring story there Tom. Thanks for your sharing your experiences with stressful situations and your victory in the end. Long may it continue!

a valuable tool in the mental battle of quitting smoking.

Join in and write your own page! It's easy to do. How? Simply click here to return to Nicotine Detox ideas created by you! .